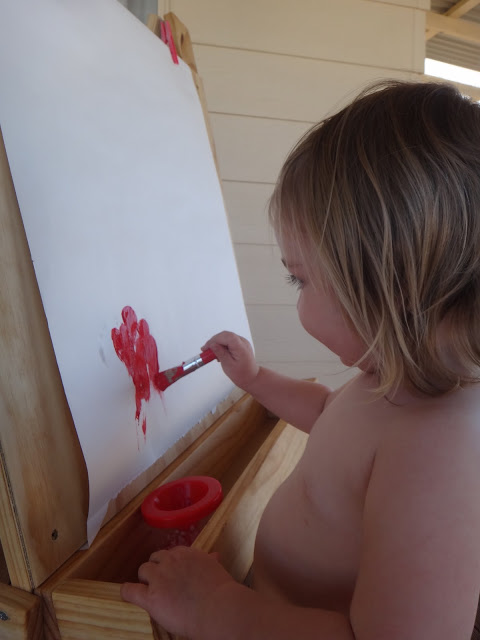 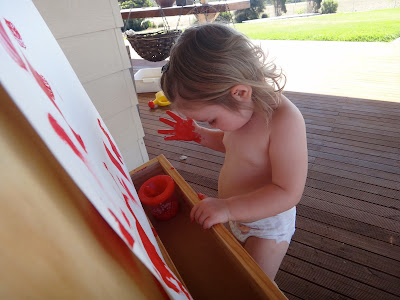 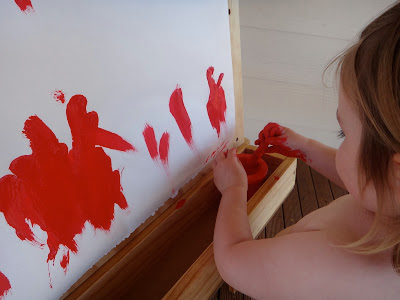 we spent some time over the weekend building an easel for jess.
i found some quite simple plans on pinterest a while ago.
i didn't really follow the plans after i read a few, not so great reviews, by people that had used them. so i kind of made most of the measurements up as i went, occasionally looking at the plans and instructions to put it together.
pretty easy really and i think it looks great. 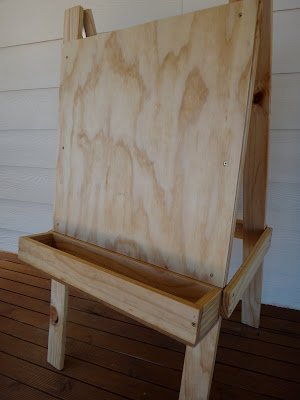 main thing is that it makes it alot easier for jess to paint.
we had been dragging a small table outside onto the deck. i would have to hold the paper and the paint pot would get in the way. so this is much better, for us both.
i have another piece of board for the other side which will be a chalkboard. still need to paint it up though.
we have been talking a lot about colours recently. i have read a book called young at art by susan striker. she recommends introducing one primary colour at a time with one pot of paint and one paint brush, her belief being that children are more interested in the painting 'process' at the start rather than having an array of colours to work with. the same colour can be used over and over until interest starts to wane. by then introducing another colour the painting process is seen with renewed interest. susan recommends moving through the primary colours, then black on white paper, white on black paper before moving into mixing colours.
an interesting read with lots of great ideas to foster creativity.
Posted by jo
Labels: books, jess

jo
hi i'm jo, partner to one handsome man and mother to three beautiful daughters. i blog here, from a small town on the coast of south australia, to record our days which are spent watching the ever changing ocean... sewing... knitting... cooking... gardening... creating... nurturing...